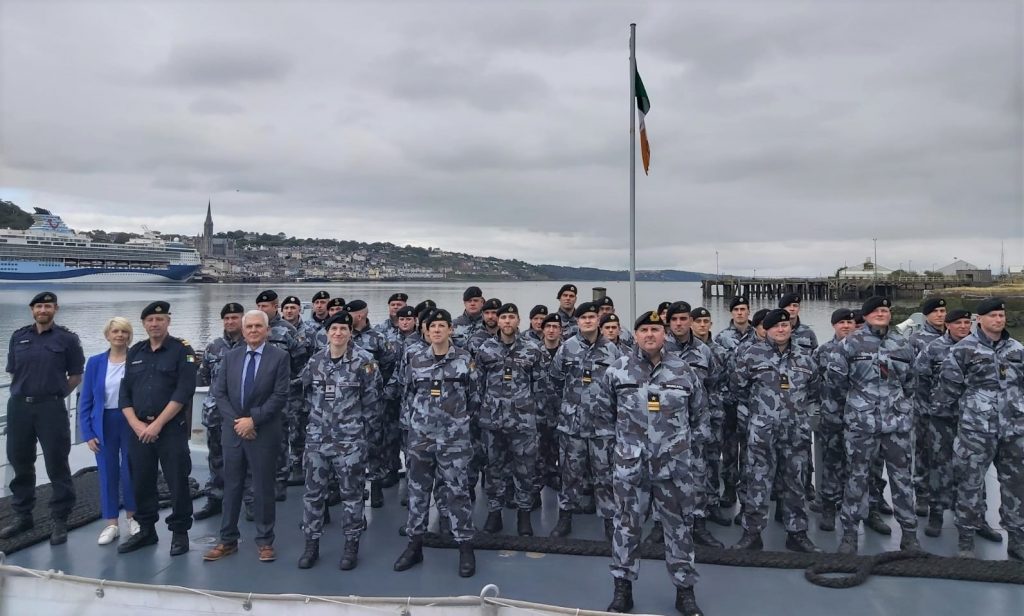 In anticipation of its 75th anniversary, the Irish Naval Service decided to transition its previously over complicated array of uniforms into a single operational uniform; a visual representation of its identity as a co-equal service within the joint Defence Forces. Tailored Image was the natural choice of partner for this venture given its specialism in military uniforms.

Tailored Image worked closely with the Naval Service to develop a uniform that would increase the visibility of the navy whilst achieving all the protection required for the many challenges to which navy uniforms can be subjected. One of the most important factors was to achieve protection against heat and flames. The new uniform product is made from ‘no melt’ and self-extinguishing materials meaning it will never melt when exposed to direct flame or extreme heat, regardless of the number of times it is washed.

In design terms, the distinctive Defence Forces woodland pattern provided the base pattern of the Naval Service variant, giving that visual identity that was so important to the brief in terms of providing visual connection with the other forces.

‘The Naval Service can now complete its variety of roles on land and at sea in a standardized operational uniform that personnel can be proud of. The professional uniform is easily recognisable as being synonymous with the Defence Forces while maintaining our unique maritime identity.’

‘We have a very strong R&D and Technical Team working on multiple projects across military and blue-light users at any point in time. Clothing is a very emotive subject, so it was also very important that we listened to the uniform wearers’ expectations.’

A universal fact of military service is that all personnel bind together in the shared identity of their profession and service. Irish naval officers are aware that they are caretakers of a proud tradition of service which has been over 75 years in the making. This new uniform allows this sense of pride to thrive, both with long-serving members and new recruits. It brings the service into line with the other two branches of the defence forces whilst re-affirming the Irish Naval Service’s unique identity as the principal seagoing agency of the state.

Designing, manufacturing and delivering bespoke uniforms for transport companies – it’s something we know a thing or two about at […]